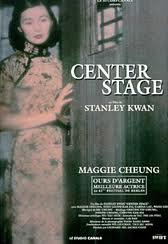 Stanley Kwan’s fascinating film Center Stage is a film within a film within a film. It is first a biopic about the short life of one of China’s greatest silent film actresses, Ruan Ling-yu, who rose to fame around 1930 and committed suicide just five years later at the age of twenty-four. Parts of the film resemble a documentary. In these parts, we hear real figures from the silent era, now in their later years, talk about Ms. Ruan and the times in which she lived. At other times the film is about the making of itself. At one point, we see Kwan having to reshoot a close-up of Maggie Cheung because the camera clearly picked up her breathing during Ruan’s wake. All told, we are watching an exploration of who Ruan Ling-yu was, a presentation of what people believe happened to her, and - if one looks between the lines – a thinly-veiled commentary on the media and the destructive power of sensationalism.

The film explores two aspects of Ruan’s life in great detail, and in doing so, it depicts her as a woman who was strong professionally, yet somewhat weak personally. At a time when actresses were often typecast based on their looks or previous roles, Ruan was able to branch out and play a range of characters. This was partly by design. In an early scene, a group of movie executives, including two legendary directors named Pu and Sun, sit around a bath house and plot a course of action that will culminate in Ruan Ling-yu being seen as an actress of great versatility. The plan is for her to play a prostitute in Reminiscences of Peking and a regular person in Wayside Flowers. Later, Ruan will extend her range further by getting herself cast in more modern roles. In this part of the film, we witness Ruan’s professionalism and see examples of the kindness she showed to those also in the movie-making business. We see nothing with even the slightest hint of indignity.

In her personal life, Ruan was involved with two men. The first was Chang Ta-Min, who was an immature, vindictive playboy whose vices included gambling and women. The two of them met when Ruan was sixteen. They briefly flirted with the idea of marriage but eventually settled into a relationship that had no possibility of bringing either one of them real happiness. They lived together, but slept in separate beds, and Ruan eventually became tired of taking care of him. When their inevitable separation occurred, Ta-Min demanded $300 a month in “separation” money for two years. This sum was negotiated down to $100 a month and paid by the second man in Ruan’s life, Tang Chi-shan. Unfortunately, he was only slightly better than Ta-Min, and their relationship left them both vulnerable to charges of scandal and impropriety.

There’s much to admire about the film, from its authentic recreation of 1930’s Shanghai to its equally mesmerizing recreation of Ruan’s films. I was also intrigued by many of the cast’s conversations about the people in Ruan’s life. Not only do these conversations answer many the audience’s questions as they come up, but they also provide a glimpse into how much society’s perceptions of right and wrong have both changed and remained the same. Also commendable are the performances of the cast. Tony Leung is quite effective as Tsai Chu-sheng, a director and the possible object of Ruan’s affection, and Lawrence Ng is equally impressive as Ta-Min, a young man undone by his personal weaknesses.

Maggie Cheung is simply a revelation in the film, and the film demands a lot from her. First, she must portray a believable version of herself on screen, not a cautious or exaggerated one that the audience would see through instantly. Here, she comes across as inquisitive, slightly playful, and dedicated to the film she is making – all very authentic. Then she must play Ruan, faults and all, and adequately display those qualities that have made her such an unforgettable figure. Early on Ruan is described as being charming, enchanting, and sexy, all qualities on display in Cheung’s performance. Finally, Cheung must portray the characters that Ruan played in her movies. She does this by altering her normal acting style and matching Ruan’s movements precisely. Some may dismiss this as simple mimicry, but it is actually much harder than it looks.

I believe it is impossible to watch this film and not want to rush out and find the films it references. However, this may be one of the few biopics about someone that there is very little left of. It is said that only eight of Ruan’s films still exist, and many of them are said to be in very poor condition. Luckily, one of the ones that survives is her final film, New Woman or, as it is more commonly called, The Goddess. It is also the film that turned the media against her, and viewers can judge for themselves whether the film was as incendiary as they accused it of being. There is also some dispute over Ruan’s suicide note referencing the poisonous effects of gossip, which some people suggest was written by Tang to cover up his abuse of Ruan. Perhaps this is one of those cases of the legend being printed instead of the facts. Even so, the film is moving, fascinating, and eye-opening. It is about a time and a person that could easily have been lost to time and history. That she is remembered as fondly as she is today is a testament to her talent and her importance to Chinese films. (on DVD and Blu-ray)

*Center Stage is in Cantonese, Mandarin, and English with white English subtitles. Alas, some of the subtitles are hard to read.
Posted by Azrael Bigler at 9:00 PM