*A little something I wrote for a writing class and never really used.

A Misperception of Cinematic Proportions 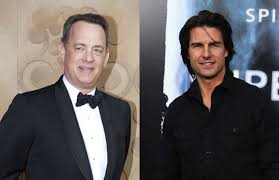 They are two of the most well-known people in the world today. They have both enjoyed unparalleled success in their professions and as a result have achieved a status in unmatched by their peers, while also being nominated for awards for their work. They even share the same first name. However, for all their similarities, they are, in fact, unique from the other. Tom Hanks and Tom Cruise, two extremely famous and talented individuals, are very different kinds of actors, and they play vastly different roles.

In interviews, Tom Hanks comes across as a person with whom you’d be equally comfortable sitting at a bar drinking with or talking about scientific theories over tea, and that persona is reflected in the films he makes. He has a voice that exudes confidence, while simultaneously assuring those around him that he indeed shares the attributes of the nice guys he often portrays – sturdiness, dependability, decency. Audiences feel comfortable with him in the same way they felt comfortable with Fred MacMurray on the 1960’s television show My Three Sons or with Michael J. Fox in any of his comedies from the 1980s and 1990s. Furthermore, Hanks conveys the sense that he is one of us, a kind of everyman. Like Jimmy Stewart before him, he conveys to audience members the message that each of us can rise to the occasion when we need to, that we too can give everything up for a mermaid, triumph over loneliness and possible madness on a deserted island, and fight against those that seek to discriminate against us.

However, what’s particularly unique about Tom Hanks is that his characters are rarely powerful enough to do these things alone. Instead of being the “go it alone” type, which Tom Cruise can play with relative ease, Hanks’s characters are often part of a community, of a family that rallies to his side in times of adversity, and of a country that will one day understand and appreciate the sacrifices he makes for it. To watch his films is therefore to watch an image of the American Dream, one which reinforces the classic notion that good will be victorious in the end – he will win the lawsuit, get the girl, save his marriage. And it’s not as if Tom Hanks becomes a good person after a long inner struggle; no, he is often already the kind of man that a mother would love for her daughter to bring home. In fact, it’s frequently his character’s role in life to help other characters, as well as the audience, become the decent people they have always wanted to be. Just look at how many people he helps just by sitting on a bench and waxing nostalgic in Forrest Gump. In fact, Tom Hanks is so good at playing this kind of role that it even rears its ugly head when it shouldn’t. In Sam Mendes’s 2002 film Road to Perdition, Hanks’s character should have been a cold-blooded killer, yet halfway through the film, there he was teaching his son to drive and embarking on the kind of comic escapades that would be more appropriate in a Buster Keaton or Charlie Chaplin film. Perhaps the screenwriters looked at who their star was and just couldn’t help themselves.
Watching Tom Cruise on film, however, one does not always get the sense that our more patriotic sentiments are being pandered to. In truth, we’re not always sure we should even like Cruise’s characters. Maverick, his career-making role from Top Gun, may have been a decent man, but there’s no denying the truth behind Ice Man’s rather astute observation that he is dangerous. Cruise further develops this notion by staring straight at Ice Man and looking as if he is preparing to lunge at him in anger. Moreover, Cruise excels at playing characters who often have a hidden truth buried somewhere just waiting to come out. It could be that he’s the product of abandonment, that he’s not as knowledgeable as he would like people to believe, or that he’s dealing with the emotional scars of having committed unconscionable acts while following orders. Watching Cruise on film, we know there’s something there – we can see it in his face. We just don’t know what it is or exactly when it will force itself out. Characters like these are not easy to play, and yet he makes it look downright effortless time and again.

It is this element of Cruise’s acting that allows him to play characters that can be completely believed one minute and entirely distrusted the next. It’s no wonder that Cameron Diaz can’t decide whether he’s trying to save the world or make himself filthy rich in 2010’s Knight and Day. In fact, Cruise often begins a film as a rather unsympathetic character only to learn a valuable lesson about life, love or family by the end of the film. By the end of his movie Rain Man, he’s completely forgotten about the money his father declined to leave him and learned the value of brotherly love. Furthermore, with a smile that can range from cocky to heartfelt and an intensity that can appear at a moment’s notice, Cruise is well capable of jumping from action films to dramas, and from dramas to romantic comedies. Who else could have played the vampire Lestat, the sexist Frank Mackey in Magnolia, and the idealistic sports agent in Jerry Maguire? Certainly not Tom Hanks. In fact, Cruise is more like Robert Mitchum than he is Hanks. Mitchum could be charming and courageous in one movie and talking about the epic battle between love and hate while trying to steal a fortune from two orphaned children in the next. In short, we’re not always sure what to expect with Cruise, and to me, this is a good thing.
Posted by Azrael Bigler at 9:00 PM