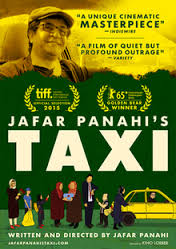 Pay close attention to the first scene of Jafar Panahi’s Taxi, for it establishes many of the themes that reverberate throughout the film. The scene is remarkable for its documentary, fly-on-the-wall feel, and much of this is due to the stationary position of the camera. It sits there motionless, focused on two people, a man and a woman, who could not be more different. The topic of their conversation is the executions of two thieves for what appear to be minor offenses. The male sits in the front seat and boasts loudly of his support for Sharia law and the harsh punishment the thieves received; the women is in the back seat, and she openly wonders just what more killing will bring to a country that has seen far more than its fair share of it. What follows in the film somewhat answers that question, while also bringing many more issues up for discussion and then leaving them floating in the air unresolved.

Perhaps unresolved is the wrong word, for most of the characters we meet seem to know deep down what the answers would be in a perfect world, yet they have been forced to accept a situation in which acting on those answers can be dangerous. Towards the end of the film, we meet a woman with a particularly intellectual and legal mind, one who is on her way to provide legal advice to a woman unjustly jailed for over a hundred days. In a better world, she would be a respected champion of human rights; here, she ekes out a living selling flowers.

Panahi, director of such films as The White Balloon and The Circle, is the star of Taxi, and it is this fact which gives the film its sense of mystery. I admit there were times when I openly wondered whether I was watching a documentary or a work of fiction. In the film, Panahi has been banned from making films and finds it necessary to make a living as a cab driver. This is an entirely believable scenario, made even more realistic by Panahi’s lack of skills as a cab driver. In one humorous moment, he gives directions to someone only for a passenger to interject with better directions. Later, two women get in the cab and ask to go to a place he clearly doesn’t know how to get to. His solution: Pull over and get them a different cab.

Humorous moments aside, Taxi is a rather powerful film about serious issues. As a director, Panahi seems to understand that small doses can add up to quite an impressive whole, and so he gives viewers brief scenes in which an aspect of society is commented on without any real chance of true resolution or a happy ending. We are presented with an Iran that seems at war with its own citizens. Laws allow for the unequal treatment of women and those wanting to research or make films must adhere to strict guidelines. In fact, hearing the rules a director must abide by gave me a sense of déjà vu. It was as if Will Hayes had risen from the grave and taken a job running Iran’s film industry. Late in the film, Panahi picks up his niece from school and the two of them discuss her hopes of becoming a director like her famous uncle. Her challenge of course is making a film that will be deemed distributable, and as we watch her attempts to do so, it becomes clear that this is much harder than it should be. Real life just doesn’t want to cooperate.

I feel like I haven’t done justice to Taxi yet, for I haven’t conveyed just what a moving experience the film is. It starts out with a fascinating, thought-provoking conversation and grows increasingly mesmerizing with each successive scene. We come to know the confusion of artists and the brave resistance people show just to be able to watch or study a banned movie. We see people clinging to dreams even though it would take absolute conformity to live them out, and it is as inspiring as it is frustrating. I was reminded of the scene in Pleasantville in which Jeff Daniel’s character pleads with the city council for the right to paint. He insists that he’ll accept to whatever conditions they give him so long as he’s able to keep doing it, completely oblivious of the notion that compromised art is not really art and will never leave him truly fulfilled.

Panahi knows this and refuses to conform. With Taxi, he has truly given audiences much to think about, and those who see the film will be better for having done so. (on DVD)

*Taxi is in Farsi with English subtitles.


*There are no end credits to the film, and yes, this is significant.
Posted by Azrael Bigler at 9:00 PM