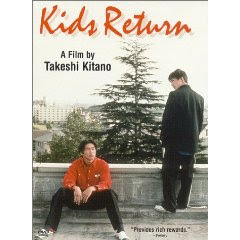 To say that bullying is a problem in Japan is an understatement. Every year, many students leave suicide notes explaining that the harassment that they had endured daily was simply too much for them to put up with anymore. For many what do not take this action, the only recourse is to find someone to oppress the oppressor, a situation that often inflames the situation. Takeshi Kitano's Kids Return offers viewers a fascinating look into this world of bullies and victims.

The movie begins with two young men Masura and Shinji meeting again after a separation. Masura says he’s looking for work; Shinji says he no longer has the same career. The movie then takes the viewer back to see how these two characters got to this point in life. We learn that Shinjo and Masura were probably the most feared bullies in school, punching their classmates, stealing money from those they deemed weaker than themselves, and setting a teacher's car on fire. They pass their time in a café and on occasion try to get into adult movies. Among the two of them, Masura is the aggressor; Shinjo stands behind him silently, and as the film progresses, it becomes clear that even Shinjo is a victim of Masura's bullying.

One of their victims is Watanabe, a young man in love with a waitress. Watanabe, while being a better student than Shinjo and Masura, is not going on to college, pinning his hopes instead on working for a company. He is viewed by some as having a bright future. As he begins his new life, Masura and Shinjo take up boxing. Masura enrolls to get revenge for a beating he took at the hands of a boxer; Shinjo signs up because Masura tells him to. It is here that their lives go in different directions. Shinjo is revealed to be the superior athlete, a finding that may end his friendship with Masura. Masura quits boxing, and Shinjo thinks that that is the action he should take as well. It is clear that of the two Shinjo has the brighter future and has the potential to become a great boxer. However, he cannot escape the pattern that he has have fallen into. In a way, Masura will always be a bully, and Shinjo will always be a follower without the strength to listen to his own conscious. Eventually, Masura gets involved in organized crime, the perfect profession for a one who lives to intimidate others, and Shinjo falls under the guidance of a boxer that he should have known enough to steer clear of. Meanwhile, the professional world is equally tough for Watanabe, whose dream life seems to slipping away into a haze of drowsiness.

Kids Return offers some interesting insights into bullies. They are not people without interests. Their interests are simply not those subjects that are emphasized in school. Masura envisions himself as a comedian, then a boxer, and ultimately a crime boss. Other bullies see Shinjo take up boxing and enroll at the local gym themselves or take up comedy in an attempt to be stars. However, not even then can they shake the pull of violence and retaliation.

At the end of the film, Masura and Shinjo ride in circles in their old playground and wonder if there are any people like them in school today. As they do, a young boy looks out the window, as if yearning for a world that offers him the excitement he doesn’t find in the classroom. Perhaps he is a bully, like Masura and Shinjo. Perhaps he is the next generations’ Watanabe wanting more than the two people outside got. The movie does not say. However, one gets the impression that the cycle that produces bullies and victims in each successive generation will, unfortunately, continue and that it may be this boy staring out the window who is circling the yard and reminiscing about lost opportunities years from now. (currently out of print; previously available from Image Entertainment)

*Kids Return is in Japanese with yellow English subtitles.
Posted by Azrael Bigler at 7:11 PM

Labels: 3 and a half stars, Japan, reviews, Takeshi Kitano