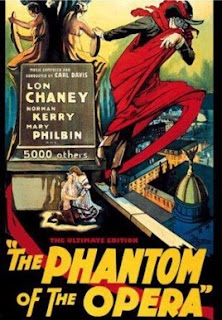 In a way, her reaction is completely natural. After all, she probably envisioned their meeting going a bit differently. He'd reveal himself to be not only her teacher and defender but also her handsome prince; she'd fall head over heels in love instantaneously, and they'd leave together for a land full of beauty and romance. Instead, standing in front of her is a grotesque, masked man who fills her with trepidation and disgust. It seems natural that she would scream, yet the fact that she does scream makes the victim of her scorn sympathetic, which is a bit perplexing as he is a murderer.

The woman in this tale is Christine, a young singer who is the understudy in what appears to be either an opera or musical theatre. In the beginning of the film, she gets her big break after Charlotte, the woman playing the lead role, receives a letter informing her that Christine is to perform the lead or else. Mysteriously, Charlotte falls ill, giving Christine the chance to shine. She does not disappoint, and the crowd gives her a standing ovation. After the show, her boyfriend Raoul congratulates her and then tells her that she can now give up singing and marry him, as she has already achieved her dream. Apparently he is unaware that a woman can have a career and be a wife at the same time. However, she implores Raoul to forget about their love, for she must think only of her career and her "master." In an odd twist, a few scenes later, her "master" makes the same request that Raoul made, the difference being that she is unable to refuse the Phantom.

Eventually, the Phantom takes her to his "world," a place that bares a striking resemblance to Hades. To get there, the Phantom takes her five levels below the opera house through a maze-like structure that leads to a black pool of water. They board a small boat and row further away from civilization, finally stopping at a location that seems worlds away from civilization, and perhaps that is what the Phantom wants. As he explains it, man's hatred of him turned him into the Phantom, and he can only be saved by Christine's love, a position that, in a way, strips him of his power over her and reduces him to a mere mortal pleading for affection. From him, he promises, Christine will have everything her heart desires. His only condition is that she not touch his mask. He should have known that temptation would be too much to resist.

The Phantom of the Opera moves at a rather poetic pace. First, there is triumph; then there is shock and error, followed by fateful promises, and eventually betrayal and rescue. All through this, the Phantom alternates from a sympathetic character to a monster. Sure, he loves Christine, but he also imprisons her, threatens to kill Raoul, and eventually murders Raoul's brother, as well as a stage hand who saw a little too much of the Phantom in the beginning of the movie. There are also references to other earlier stranglings, and yet it is difficult to not feel a little sympathy for the Phantom as in one scene he listens to the love of his life conspire to run away with someone else.

The Phantom of the Opera is visually impressive. Of particular note are the scenes in which the Phantom leads Christine to his lair and the scenes at the masked ball. Particularly impressive is the scene in which Christine begs Raoul to save her from the Phantom. While she pleads with Raoul, the Phantom stands behind them, perched like a gargoyle on a statue, his red cape flapping in the wind, the mask of death on his face. At that moment, he is both a scorned romantic and an assassin plotting his next violent act.

What a difference a few edits make. Running about 15 minutes longer than the 1929 re-release, the 1925 version of The Phantom of the Opera is a completely different experience. In the 1929 version, it is possible to sympathize with the Phantom briefly; however, that sentiment is not possible in the original version.

In the 1925 version, Raoul is the romantic character. He attends the opera often, hoping to see Christine perform and truly wants her to live out her dream. He and Christine are deeply in love, and their embraces and kisses are passionate and prolonged. (In the 1929 version, they do not kiss.) In a scene missing from the re-release, Christine explains how she believes that her deceased father has sent her a "Spirit of Music" to help her become a successful singer, while Raoul can only listen and worry. While Raoul asks Christine to give up her career in the re-release, he does not in the original.

Another startling difference involves the murder of the stage hand. In the 1925 version, the stage hand is killed shortly after seeing the Phantom, causing his brother to vow revenge. The killing is describes as "another strangling," indicating that the Phantom could possible be a serial killer. One important difference occurs when Christine rejects the Phantom's overtures; in the original release, she does so because she recognizes him as the man who has been committing murder, not because of his disfigured appearance. These two differences cast the Phantom as a villain from whom Christine must be rescued; he is not a rejected romantic.

Some minor differences are also worth mentioning. The original included some lengthy shots of scenery. The film begins with shots of the opera house and proceeds to introduce a series of characters, such as the stage hand and his brother. The 1929 version opens with a view of the stage, and the performance begins quickly. The minor characters are not introduced at all. While the 1929 version showed the opening performance occurring at the same time as the sale of the opera house, these two events occur separately in the original version, and the new owners do not inquire about the Phantom as soon as they do in the re-release. In addition, the final scene of the 1925 version was removed from the 1929 re-release.

The effect of these changes is that two films have been created. The 1925 version is a standard tale of a woman in trouble and a man trying to save her; however, Raoul and Christine's love is fully developed and moving. The audience wants Raoul's rescue to succeed, and the final scene rewards them for their sentiment. In contrast, the 1929 version begins as a tale of unrequited love and ends with the attempted rescue of a woman threatened by a heartbroken and violent man. That version challenges the audience's expectations and fascinates.

Both versions of The Phantom of the Opera are available together on a special edition DVD from Image Entertainment.

*The 1925 version was not well-received upon its release, and it was changed a few times. At one time, the film was a half an hour longer, as footage detailing a conflict Raoul has with a member of the Russian military was added. This footage was eventually removed after it was deemed to be unnecessary, and only still photos of it exist today. It also appears that a sound version of the film existed at one point.
Posted by Azrael Bigler at 4:49 PM