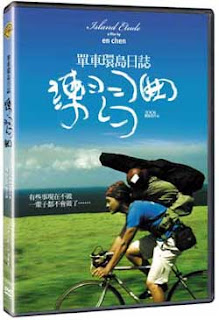 There is a beauty to Island Etude that is difficult to put into words. On the surface, Island Etude is the simple story of a deaf college student who takes a break from his studies to travel around Taiwan on a bicycle. Along the way, he sees places in Taiwan that, despite Taiwan’s size, many Taiwanese people never see. Underneath this, however, is something else entirely.

The lead character is Chiao Hsi, a hearing-impaired young man who at first glance is thought by some to be from a different country due to the sound of his voice. On his journey, Chiao Hsi encounters a fellow bicyclist named Tsun. Their differences, despite their similar ages, are striking. Chiao Hsi is dressed in shorts and a regular short-sleeve shirt; Tsun has formal bicycling gear. Chiao Hsi is quiet, while Tsun wears his emotions on his sleeve. When Chiao Hsi first sees him, Tsun is swearing at and kicking a vending machine. Tsun appears to be on his way to see his girlfriend, with whom he argues over the phone in earshot of Chiao Hsi. Chiao Hsi appears willing to wait out a rain storm; Tsun, on the other hand, is in a hurry, so he gives Chiao Hsi his cell phone and tells him to bring it to him in Hualien. When Chaio Hsi does, Tsun is annoyed that he took so long doing so.

Tsun is a member of a generation in Taiwan that appears to be lost in the system of cram school, army, and emplyment, and that system has taken its toll on him. Tsun watches TV, plays video games, and has a relationship that could end at any moment. His parents are divorcing (if his mother can locate his father, that is), and his mothers, who gambles over the Internet, appears to be looking forward to him leaving home and fulfilling his compulsory military service, during which many girlfriends break-up with their boyfriends. Tsun does not ever pay much attention to Chiao Hsi when he arrives in Hualien to return his cell phone. After eating, Chiao Hsi washes his own dishes, sleeps on the couch, and is barely even talked to.

Along his journey, Chiao Hsi meets other interesting characters: a model from Lithuania named Ruta, who is amazed by the beauty of Taiwan, a teacher who is retiring young and has a deaf student that she is concerned about, and a group of elderly women who know when their old boss is returning to Taiwan and never fail to show up and protest his arrival (he moved his factory overseas, costing them all of their jobs). The women’s bus driver is a kind man who says he only charges them half the normal rate. Chiao Hsi also visits his grandparents, and some interesting revelations come out in these scenes. His grandfather tells him that many people in their area, when they discovered that a deaf baby had been born, blamed Chiao Hsi’s parents and ancestors, believing that they must have done something wrong for a baby with his physical challenges to have been born. Later, his grandfather talks to other members of the community about the coming year and about how lucky it will be for this area. The reason he gives for this is that the goddess Matsu is visiting, an event that is said to usher in good fortune. In a particularly moving scene, Chiao Hsi watches as his grandfather kneels down to have Matsu carried over him, an act that perhaps spreads prosperity to those people that are underneath her as she is carried along her way. Chiao Hsi brushes back a few tears as he watches this. His grandfather’s generation is so different from the one he saw earlier talking about investment and government action as being the reason for both economic prosperity and recession.

As Chiao Hsi continues his journey, the connection of the Taiwanese people is revealed. People he doesn’t know offer him a ride because it is raining, a woman allows him to sleep in a classroom overnight even though he is a stranger to her, a fellow bicyclist helps his to repair his bicycle but refuses payment, explaining that he has been helped in the past as well. It seems that Chiao Hsi’s trip is as much about seeing Taiwan as getting to know its people. And yet his trip may be much more than that. It can also be seen as both one that was not possible before due to the condition of Taiwan’s roads in the past and one that may not be possible in the future. The film references Taiwan’s changing coastlines and hints that Taiwan may in fact be shrinking. A fellow biker tells us, “Bikers always see the best and the worst,” and this man has seen an area of Taiwan’s coastlines go from being plentiful, healthy, and green to being barren and grey, leaving the audience to wonder just how long these bicycle trips will be possible.

In the end, Island Etude is a view of Taiwan simultaneously in transition and routine. It is no wonder than many young people in Taiwan have dreams of traveling the world and delay or refuse entirely to enter into the routines that generations before them did, for they seem to know that once you begin the routine, it is often impossible to stop it. Perhaps that is why Chiao Hsi began his journey in the first place. As he says, “Something you don’t do now, you’ll never do.” (on DVD in Region 3)

*The Region 3 DVD has white English subtitles that have occasional misspellings. Island Etude is presently unavailable in the United States.
Posted by Azrael Bigler at 7:37 PM