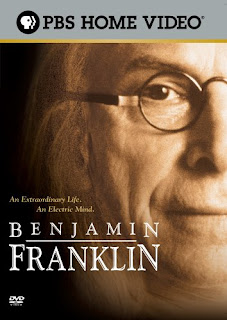 Benjamin Franklin should be required viewing in every high school in the United States. There are not many documentaries that that can be said about, but every once in a while, one comes along that is so magnificently constructed and narrated that it leaves the viewer in awe of its subject. PBS's 2002 documentary Benjamin Franklin, directed by Ellen Hovde and Muffie Meyer, is one such documentary.

Franklin's story is told in three parts. Part One starts with Franklin's childhood. It explains how Franklin grew up at a time when many believed in witches and demonic possession and when many believed that all acts were attributed to God's divine plan. If your house caught fire, it would not be saved; if lightning struck, that was simply God sending you a message. Franklin would, in many ways, lead people away from these beliefs through his scientific discoveries, yet as the documentary makes clear, he did so much more. As the first part explains, he only had two years of formal education, but by the age of 16, he was such a skilled writer that he could write convincingly in the voice of a middle-aged widow. Part One also takes viewers into Franklin's adulthood. It shows his early trip to London during the Enlightenment, his later success in the publishing industry, his creation of the junto, and his discovery of electricity, among other things.

Part Two describes his 15-year trip to London, which he was accompanied on for the first three years by his son William. The viewer is able to see how Franklin reacted as Americans rioted over the Stamp Act and how instrumental Franklin was to its eventual appeal. Part Two also shows how much the thought of hostilities with Britain affected him, how much he yearned to avoid conflict, and how much he tried to prevent the deterioration of the relationship between the Colonies and Great Britain. It depicts the humiliation he suffered at the hands of British government after he leaked the Hutchinson Letters to the Boston press, degradation that turned him into a revolutionary for good, a change that ultimately cost him his relationship with his son.

Much of Part Three is devoted to Franklin's role in the Revolutionary War, a role which U.S. history seems to downplay. As war raged, Franklin had the near-impossible task of obtaining financial and military support from France when he did not have any way of paying France, as the Colonies has run out of money. That he achieved his goal was truly amazing. The documentary shows how Franklin was able to adapt to and flourish in France. He was witty, popular with women, and skilled at conversation, all of which endeared him to the French and which eventually won him audience with the King. The documentary shows how important France's support was in the Revolution and how instrumental Franklin was in securing that support. The documentary ends with Franklin returning to the U.S. after having signed the treaty ending the war. Back in the U.S., Franklin continued to astound. He spoke out against slavery and may have delivered the speech that ensured that the U.S. Constitution would be ratified.

The documentary uses a combination of pictures and recreations to tell Franklin's story. Franklin is played by two actors, Richard Easton and Dylan Baker, each of whom superbly capture Franklin's wit, charisma, curiosity, and anger. The viewer comes away with a clear understanding of just what made Franklin such a success. The other actors, some of whom are well-known, are equally impressive. What I admired most was the time that the documentary took to tell Franklin's story. Viewers get a sense of how long Franklin spent in London and just how arduous the task of getting France to commit money and troops was.

The history of the United States is not complete without a thorough understanding of the role Benjamin Franklin played in it. This documentary illustrates that role perfectly.
(on DVD from PBS)