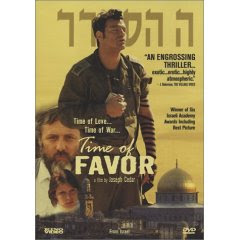 "This land of Israel is bought with pain," a young woman named Michal says as she surveys the barren but remarkable land that is the West Bank. Her companion, Menachem, a commander of a religious unit in the Israeli Defense Force, at first does not understand her viewpoint. Michal explains that for her the West Bank and its settlement have brought her nothing but misery. As her mother was dying of cancer, she begged her husband, a powerful and influential rabbi, to take her to the city to get chemotherapy; however, he rejected her pleas, arguing that the settlement would fall apart without him. Michal's father essentially chose a barren land without running water over his wife.

Menachem commands a group of fervent religious youth who seem to take their inspiration from Michal's father Rabbi Meltzer, whom government officials deeply distrust, and for good reason. Rabbi Meltzer's sermons send out the message that the land around them is theirs, that their religion takes precedence over their families, and that they have been taken for granted for far too long. Michal, while respecting and valuing Rabbi Meltzer's counsel, finds himself divided between his religion, his duty to his country, and his own heart. His friend Pinchas hangs on Rabbi Meltzer's every word, believing each one to carry with it a divine message. When the Rabbi asks Pinchas to meet Michal, he immediately assumes - and he is correct in doing so - that he has been selected to marry her, and he is more than willing to accede to this union. Unbeknownst to him, Michal and Menachem are in love, and Michal is unwilling to be given to her father's best student as some sort of prize for being the smartest kid in the class.

Time of Favor is more than just the story of three young people caught in a love triangle. It is also about extremism and how the words of one man can cause people to be blindly devoted to a course of action that could led to open war. Rabbi Meltzer preaches the idea of strength in numbers; he proclaims that when their soldiers, soldiers whose loyalty is first to their religion, number in the thousands, no one will be able to deny them entrance to places that are rightfully theirs. His fiery rhetoric is enough to lead one of them to become a suicide bomber.

Time of Favor moves at a slower pace than normal films of this sort. Director Joseph Cedar takes time to develop Menachem and Michal's relationship. They do not automatically rush into each other's arms, but rather they come together like normal people do - attracted for a moment and then repealed by doubt and circumstance. Equally well-developed is their friend Pinchas, who goes from the euphoria of being admitted into his idol's family to a man willing to martyr himself, all the while his revered Rabbi denies that any of his messages could be misinterpreted as calls to arms.

Conspicuous by their absence are the Palestinians. The West Bank of Time of Favor may offer only the barest of life's necessities, yet it is one free of suicide bombers and mortar shells. The threat to that calm comes from within, and it brings with it the potential for much more pain for everyone involved. (on DVD)

Time of Favor is in Hebrew with English subtitles.
Posted by Azrael Bigler at 12:49 AM