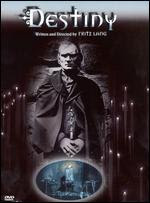 A young couple sits in a carriage, their hands entwined, smiles beaming from their faces. The woman leans away shyly, as some youngsters are apt to do when in the presence of others during romantic moments. On occasion, the two of them kiss, followed immediately by timid retreats, joyful smiles, and rose-colored cheeks. They appear to have a loving future in front of them. The carriage stops suddenly. An elderly woman traveling with a sick duck gets out; Death takes her seat. He has come for the man.

After the man disappears, the woman goes looking for him, walking along dark streets, asking anyone she sees along the way if they know which way her love went. Her search leads her to the wall of a large enclosed garden that Death built. There, the spirits of the day's deceased approach her on their way to enter the garden. One of them is her love. Later at the home of an apothecary, she sees a passage from the Song of Solomon, "For love is strong as death" and decides to drink poison, hoping that by doing so she will be able to wrest her love from the grasp of the netherworld.

Death's netherworld is an astonishing setting. The garden wall opens up to reveal a long staircase ascending to a brightly illuminated area. When Death sees her, he is puzzled because as he explains it, he did not summon her. Death reveals to her a room of burning candles, each with differing wax length depending on the remaining lifespan of those people whom the candles represent. As they talk, Death, played by Bernhard Goetzke, lifts the flame from a barely burnt candle. The flame immediately transforms into a baby; the audience is then shown a grieved mother sobbing over the body of her deceased baby. Death's pained lonely expression reveal a figure who has never gotten used to this sight. Death explains that he does not relish executing his duties, as he is the object of hate and scorn simply by following the orders of God.

Fritz Lang's Destiny is a fascinating look at the depths that one will go to for love. Death offers the woman three chances to achieve her goal. To do so, she must save at least one person out of three whose flames are about to burn out. The first is a non-Muslim man living in what could be Saudi Arabia who is having a secret relationship with a Muslim princess. The second is a man in love with a woman promised to a powerful rich man in Brazil during Carnival. The last person she attempts to save is a young China man who tries to prevent the Emperor of China from marrying the woman he loves. In each situation, the woman physically becomes the person whose love is in peril, and she must assess each situation, discover where the danger is coming from, and devise methods to prevent each of the men's deaths. To do so, she must cast off the timid, bashful quality she displayed in earlier scenes and embrace the notion that the ends justify the means. She will, in some instances, have to kill in order to prevent the one she loves from being killed. As she continues her pursuit, the innocent reticent woman that sat in the carriage in the opening scene gives way to an increasingly desperate woman who embraces ever more desolate and troubling acts just to achieve her own happiness. Along the way, she is stalked - and on occasion denied her wish- by Death itself, an act that he must do, even if his heart is with the women.

Lil Dawover is a revelation as the women and fully captures her innocence, shyness, and desperation. When she sees the specter of the one she loves, her expression is one of shock and sorrow. It is unforgettable. Walter Janssen plays the object of the woman's affection, as well as all of the men that the woman is seeking to save. This amplifies the woman's loss with each failure and makes her change all the more understandable. Destiny is as an impressive powerful film. (on DVD from Image-Entertainment)