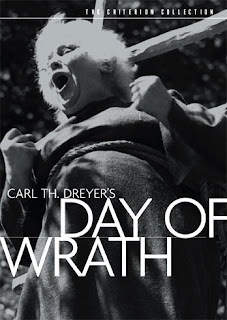 As Day of Wrath begins, two women are talking. One appears to be mixing a medicine much like witches in childhood fairy tales do. In the distance, a crowd approaches, chanting the refrain that has come to be recognized as indicating that a resident of the town has been accused of being one of Satan’s servants. The second woman sneaks away, lest she be seen with a woman who speaks of the power of evil. The other woman, referred to as Herlofs Marte, quickly dons a long cape to conceal her identity with. The throng of people is coming for her, and she, apparently not surprised by this development, sneaks away to find sanctuary. She does so at the home of the Reverend Absalom Pedersson, where she is hidden by the Reverend’s young wife, Anne. Anne is at first hesitant, but upon being told that Marte helped Anne’s mother, she agrees to hide Marte. Unfortunately, Anne’s much older husband does not show much interest in protecting Marte, allowing authorities to search his house and ultimately find and arrest Marte.

Marte’s “trial” is a charade. Her hands tried behind her back, Marte is subjected to a torture that her frail, older body cannot endure. Upon being given a moment’s respite, she is asked pointed, leading questions. For instance, she is asked not if she saw the Devil or if He speaks to her, but when she first saw him and how often he speaks to her. Her guilt is therefore not up for debate; instead, it is a foregone conclusion. To her interrogators, Marte has two options. She can confess and have a chance of being forgiven for her sins before she is burned at the stake or she can continue to deny what her inquisitors already “know” to be the truth and prolong her own agony. It is not unexpected that she “confesses.” What is shocking is the response that it elicits: “A fine confession.”

Much of Dreyer’s film has to do with the complex relationships of those in the Reverend’s family. For example, the Reverend’s mother detests Anne, even claiming at one point to seeing her eyes burn, as if possessed by those from the Netherworld. The Reverend himself is a man of compromised principals, having used his power as the Notary of the Chapter to save Anne’s mother from being burned alive, an act that netted him a prize, Anne herself. And then there’s the Reverend’s son, Martin, a man Anne’s age who is asked to consider someone who could very likely have been a classmate of his as his new mother. To Anne, Martin is somewhat more of a potential suitor than her son. Add to this, their apparent similar opinions of the madness surrounding them, the way that Anne easily falls into his arms, and their obvious attraction, and you’ve got all the makings of an affair during an extremely dangerous time for women. Shadowing over them somewhere is the ghost of Marte, who before she died promised to create suffering for her tormentors.

In Day of Wrath, Dreyer paints a picture of a world in which the illogical is seen as plausible. Marte, while denying that she herself is a witch, admits to the existence of witches. Even Anne herself wonders whether she is indeed one; she even begins rhythmically chanting Marte’s name, as if she has the power to call up the dead. Does she truly believe she is a witch, or does the possibility fill her with a sense of power that she does not have in her daily life?

What can be said of people whose beliefs are such that the notion of a plump, non-threatening woman having the power of invocation seems logical? What can be said of men who think nothing of having a group of young children present and singing in plain view of a death sentence? They are in a way victims of their own attempts to bring order to a world that they are struggling to control and preserve. These attempts have made witches of women who seem the slightest bit out of the ordinary, and during this time, wanting or enjoying physical pleasure would have been seen as the act of someone deranged or enchanted, not of someone seeking to find happiness. And it is in this very situation that Anne finds herself, her only hope being that her knight in shining armor will not abandon her in her time of need. It is a long shot at best. (on DVD from Criterion Collection)

*Day of Wrath is in Danish with white, English subtitles.
Posted by Azrael Bigler at 5:06 AM